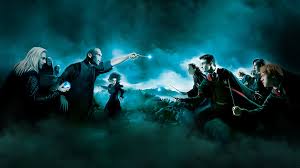 Today’s post comes to us from Spencer Fannon, a Harry Potter fan and writer whose responses to our questions and comments on Twitter caught our eye. Spencer is an aspiring ESPN reporter with his own website: jspencerfannon.wordpress.com. Check it out to see his Harry Potter fanfiction and his sports commentary! Follow him on Twitter, too: @spencerfannon.

In the Harry Potter universe, we see a very sharp and concise divide between good and evil, Light and Dark, one that is much clearer than in the real world. In the real world, the lines between good and evil are very much blurred. To one person, an act could be considered good while the same act could be considered evil to someone else. This case is no more evident than in war. War is evil, it is something that must be avoided as much as possible but when you are in the midst of war, one cannot afford to hold back.

The Death Eaters are much like Hitler’s Nazis, they are waging a genocidal war against their enemies, seeking to wipe them from the face of the earth. So why do Harry and his allies not fight back against a fanatical enemy by using all means at their disposal? We see Harry use two of the three Unforgivables in the later books, the Cruciatus Curse against Bellatrix Lestrange (Rowling, “Order of the Phoenix” 810) and the Imperius Curse against the goblin Bogrod and Travers (Rowling, “Deathly Hallows” 533), but why doesn’t he use the Killing Curse?

The moral quandary of fighting a war is — do you fight using all means at your disposal, fighting to end the war as quickly as possible to try and save lives on your own side, or do you attempt to keep your morality and fight using only certain means? I believe an excellent example of this is using another famous Harry, Harry S. Truman at the end of World War II. Truman becomes President in 1945 after FDR dies, and is faced with the dilemma of this moral choice, to end the War in the Pacific as quickly as possible by using the atomic bombs, or by trying to invade Japan and end the war using more conventional means. We know what happens, the two bombs dropped on Hiroshima and Nagasaki killed around 200,000 Japanese, and the World War II ended less than two weeks later. An invasion of Japan could have cost the US well over a million lives, not counting the Japanese lives lost as well (H. Miller, “The Nuking of Japan” 8/1/2012).

In the end, the good guys won the day but we are left with the thoughts of who could have survived if Harry, Dumbledore and the good guys were willing to kill to defend themselves, their friends, family and their way of life.

Do you agree? Should the “good guys” in Harry Potter have used Unforgiveable Curses? Would doing so have changed their characters or the series as a whole?