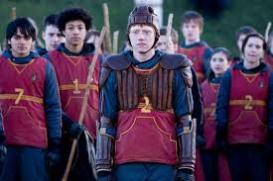 It’s time for more trivia! We’re making our way through Harry Potter and the Order of the Phoenix ten trivia questions at a time. This week, we’re adding SPY TERMS to our trivia. Words or phrases in bold will be defined and demonstrated with examples from Harry Potter following all of the questions. Let us know what you think!

1. Cho’s suggestion that they call their subversive organization “Defense Army”  is rejected because it implies what they are doing. Who suggests Dumbledore’s Army?

2. Why do the students decide on Dumbledore’s Army as the name?
3. Harry decides to start the DA training by working on one basic spell. What is it?
4. Which student thinks the spell is too simple, until he is told Harry has used it against Voldemort?
5. What does Cho tell Harry about Marietta that makes him wonder if she is a security risk?
6.  What device does Hermione come up with to use for Harry to communicate to all the DA members about meeting times?
7.  The Hermione’s idea about the fake Galleon reminds Harry of what Death Eater communication method?
8. What do the Slytherins use at the Quidditch match to conduct psychological operations against Ron?

9.  How does Malfoy bait the Gryffindor winners?

10. Gryffindor’s win at the Quidditch match is a Pyrrhic victory? How so?

Psychological operations (n): Also known as PSYOPS, this term refers to the use of psychological intelligence  in an operation normally intended to convince a person (an enemy or a potential agent) of the need to act a certain way.

Example: Professor Umbridge’s use of detentions and torture was intended to break Harry and convince him to cooperate with the Ministry. Fortunately for Dumbledore’s Army, it had the opposite effect!

To test your Harry Potter knowledge to the max, try our trivia beginning with the first chapter of Order of the Phoenix by clicking here. Answers will be posted tomorrow!