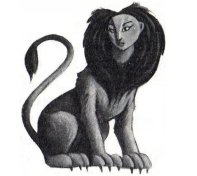 Let’s have another try at solving a code.

Last time we figured out what the initials and question mark means on the card right beneath a prophecy, “S.P.T. to A.P.W.B.D. Dark Lord and (?) Harry Potter.”

This time let’s solve a riddle that is in the Harry Potter series!

And no, we are not talking about Tom Riddle, though he of course is the riddle that Dumbledore and Harry spend the entire series trying to figure out.

No, it is time to solve the sphinx’s riddle that serves as the third test in the Triwizard Tournament in the Goblet of Fire.

First of all, let’s remember the historic use of the sphinx.

“The Sphinx is a creature from Egyptian mythology.  The huge stone sculpture of the Great Sphinx in the Egyptian desert at Giza, built about 2500 BC, is evidence of the creature’s ancient origins and importance.   . . .  In the thousand years after the Great Sphinx was built, the legends of the creature moved to Greece.  There it was described as having a female body and wings.  The Sphinx harry meets is the Greek version.”

The Sphinx understandably found its way into the earliest literature, including the play Oedipus by Sophocles, where the following riddle was given to Oedipus by the Sphinx of Thebes as he tried to pass by the Sphinx:

What animal goes on four feet in the morning,

Oedipus answers the question correctly:  “Man creeps on hands and knees in childhood, walks upright in adulthood, and in old age uses a cane” (Colbert 223).

So here is the riddle J. K. Rowling gives us in the Goblet of Fire, along with the answer!

The sphinx sat down upon her hind legs, in the very middle of the path, and recited:

“First think of the person who lives in disguise,

Who deals in secrets and tells naught but lies.

Next, tell me what’s always the last thing to mend,

The middle of middle and end of the end?

And finally give me the sound often heard

During the search for a hard -to-find word.

Now string them together, and answer me this,

Which creature would you be unwilling to kiss?”

She repeated the next lines of the poem.

She gave him the last four lines.

The sphinx smiled at him.

The sphinx smiled more broadly. She got up, stretched her front legs, and then moved aside for him to pass.

“Thanks!” said Harry, and, amazed at his own brilliance, he dashed forward.

3 comments on “Break the Code: A Sphinx’s Riddle”